The emergence of E-Commerce is not a phenomenon of 20th Century but existed in form of electronic data interchange for the standardized computer to computer exchange of information either within the organization or between two organizations (Mckinsey,2016). However such transactions were limited to business and common people has a limited role to play. However with the arrival of the internet in 1993, and its rapid adoption by masses helped World Wide Web in establishing itself as popular medium for commercial transaction (Zwass, 1996). People realizes that doing transaction on internet is not only convenient but also cost-efficient and provide more options to buyers (Alka and Murlidhar,2013). Since E-Commerce operates in a networked environment, it also helps in diminishing the geographical and political boundaries. E-commerce brought whole range of products on the networked platform where people can buy and sell. Further, E-Commerce businesses also helped businesses to remove the traditional middle man such as wholesalers, distributors and retailers from the value chain. However, E-commerce business models give rise to different types of intermediaries such as network providers, authentication and certification services, data base provider, and electronic payment system (Mckinsey,2016). Therefore the value chain of an E-commerce system gives rise to an entire new value chain which reduces the cycle time in which goods travel from the manufacturer or original supplier to consumers. The value chain of both traditional and E-commerce model is shown below: 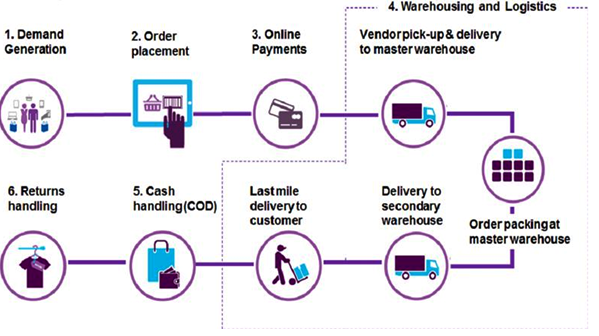 The E-commerce business disrupted the traditional retail model and the entire retail industry observed a massive shift from brick and mortar model to E-commerce model. Consumers preferred to shop through E-commerce portal mainly because of following reasons:

Therefore it can be inferred from above findings that convenience is the key driver which motivates people to buy from E-commerce portals. The convenience may be measured in terms of saving time or better shipping options etc. The shift in consumer behaviour give way to many domestic and international E-commerce players to operate in Malaysia.

Though E-Commerce business is based on disruptive and innovative value chain but at the same time it has its own challenges which is quite different than the challenges faced by traditional retail model. Some of these challenges are as follows:

Analysis of brief challenges faced by E-commerce industry indicates that challenges such as quality issues, mismatch between actual and displayed product, transit losses and longer resolution time in case of return are controllable challenges. By strengthening its operation the above mentioned four issues get resolved. However, it should be noted that the issue of missing delivery cannot be minimized only by strengthening its operation. This is primarily because of the fact that extrinsic factors such as consumer behavior also affect the same.

Let me know your views on the article